In this week's author interview, we are flying back across the Atlantic to Cumbria in the very north of England.  William Wood is another Sunpenny author, whose lovely collection of reflective recollections, titled A Little Book of Pleasures, is a literary gem worth keeping to hand and dipping into. William has recently moved to his Cumbrian home, so we asked him to tell us about it and his writing inspirations.


SP: William, could you tell us something of your background and how you came to be living in Cumbria?

WW: I was born in the UK, brought up on the Kent and Sussex border, worked in France before going to Nottingham University, emigrated to Australia as a £10 Pom and did an MA at Monash University, Melbourne where I was a Teaching Fellow. I returned to the UK, before spending a career overseas mainly in aid or cultural relations. I lived in India, Norway, Sudan, Belgium, Senegal and Ghana before returning to Sussex. I spent 4 years caring for my parents (about which I have written an unpublished, perhaps unpublishable, book) and when they died in their nineties we decided to move to pastures new. We have a daughter in France, another in Spain, one in Rutland and a son in Cumbria. We were tempted to move to France but wisely thought we would await the outcome of the referendum, never really thinking the Brexit side would win. The result was probably more difficult for the future of our children and bilingual grandchildren, but it ruled out our own move to France or Spain

We have visited all our children and grandchildren in all these places and know the areas where they live well. Last October we upped sticks and moved to Cumbria to a village we have often visited and dreamed of living in. Our house is on the banks of a river in the centre of the village. We have four grandchildren in the next village, accessible by footpath door to door. We are currently renovating the house and hope to move in next month.

SP: What a fascinating life you've had! Could you tell us what you find most inspiring as a writer about living in Cumbria?

WW: I have not lived here long enough to answer this question. I have written about the Lake District in that there are scenes set here in some of my stories, but I am no Arthur Ransome or Wordsworth. My writing is plot and character led and the setting is circumstantial. I keep holiday and travel diaries and I draw on them for local colour if need be. I have one novel based in Sudan, one in Brussels, lots of short stories set in Norway and Africa. The most recent collection, Stories for Sale is published by the Circaidy Gregory Press. My current work, see  Q9 below, roams the globe but one chapter is set in the Lakes, written before I moved. The real inspiration, I suppose, is the peace and tranquillity and the time to sit down and get on with my work (well, when we have completed the house move).


SP: Ah, I can imagine those were very inspiring travels! So what prompted you to start writing books, and how long have you been writing?

WW: I have been writing all my life. I still have my first story, written when I was six, about a boat trip in Cornwall. In my third year at school we had to write weekly compositions. The teacher, Miss Dickson, was strict but inspirational and she would often read out my effort to the class. I never looked back.

SP: Again, a wonderful memory to cherish! So what do you prefer writing?  Fiction or fact and why?

WW: At university I put on my own plays, easy when you have a captive audience. Later I turned to fiction. And like everyone I wrote poetry whenever my heart was breaking! In Australia, when I should have been doing a Ph.d. I wrote my first novel, believing I would publish it and write for a living. I never did publish it. I do not remember trying but I still have it somewhere. When I got a real job I had time only to write short stories and some journalism. I had some stories on the BBC World Service while working overseas.

I like writing fiction best. I think all writing is mainly fiction in that you are selective and use poetic licence. I do not think autobiographies are actually factually true. We choose what we wish to remember and embellish it. At least I do! My Little Book of Pleasures comprising essays is mostly factual but even there I have had to give shape to the essays, whereas real life is shapeless. That is why we write: to give form and meaning to our experience, perhaps.

SP: If you had to give readers a tip about how to get started on a book, what would it be?

WW: I would hesitate to give advice to other writers. Some of the best novels I have read have been by people who know that I write and ask for an opinion on their own unpublished attempts.  I am happy to encourage, to give my opinion and painfully sometimes to point out how seriously bad they are, but I would not tell anyone how to approach the agony and the joy of actually writing.

SP: Encouragement is perhaps the only spur some writers need. So, William what is your greatest strength in life: and then (of course) what do you see as your weakest point:

WW: My strengths and weaknesses? I don’t know. What is this, a job interview? (SP: chuckle) A weakness, I suppose, is that once I have finished a work I lose interest in it. I hate the self publicity, the promotion. I just want to get on with the next project. I live by and for writing. I have no business sense.

SP: Many writers feel the same, we know, William. Now, this is a standard question, but if you had to live a year with only one book, what would it be? And do you have favorite authors?  If so, why do you admire their work?

WW: I have tried to read A La Recherche du Temps Perdu but it does not grab me. Perhaps if I lived alone with it for a year I would fall under its spell as so many others have done. As for favourite authors, that would depend on where and when. I have always tried to get under the skin of the country I am in by reading their literature. In Australia it was Patrick White and Henry Handel Richardson. In India I made quite a study of Indian writing in English. There are too many good authors to mention.

On the lighter side, like Graham Greene, I enjoyed RK Narayan immensely. In Norway, once I became competent in the language, I was bowled over by Knut Hamsun. If you count playwrights no one yet has surpassed Ibsen for tight story telling as well as the actual drama. I try to keep up with the latest writers, too. There are serious novelists as well as good detective story writers, not all of whom have yet been discovered by the “scandi noir” fad on our TV screens. I also try to keep up with the latest French literary fiction and have quite a library. It is invidious to single out one writer. They are all different and offer different pleasures. Even the lighter works have a sophisticated, literary quality. My love of French literature began when as a teenager I fell under the spell of the existentialists and read Sartre and Camus.

Of English writers I read all Thomas Hardy over five years of commuting to London on the train. However, I still think Graham Greene is the best story teller, and of recent writers Graham Swift, Ian McEwen and Sebastian Faulks continue to dazzle. Then there are the Americans! Last night, mesmerised, I finished reading the most honest, evocative and devastating account of a love affair that I have ever read. The addiction of physical desire, the dread that it all must end …. I shall write, as I often do of books that impress me, a critique of  James Salter’s A Sport and a Pastime on my own blog in the next few days. Were I to answer this questionnaire tomorrow, no doubt quite other authors would appear

SP: What a rich literary selection! Are you writing anything at the moment?  Can you tell us what it is?

WW: Yes, I am writing a novel. I am two thirds of the way through a second draft and am leaving the ending open for now. As a change from the British scene, I am writing the novel in French. I have bought an Azerty laptop, got a French pseudonym and am on-line at least leading a double life. I expect to be working on this all this year as I am a slow writer and an even slower polisher/editor of my work. I actually have several English MSS unpublished.


SP: How marvellous to be able to write in French at that level of proficiency. Okay, the final question, William. If you had a bucket list what would be in the top three positions?

WW: My bucket list?  My parents both ended up with dementia, so I would hope to keep my mental and physical health until the end. Secondly, despite Brexit, I hope my grandchildren thrive in Europe and the wider world.

Thank you so much for joining us on our blog, William. It's been so interesting to hear about your life and literary inspirations.

William's book, A Little Book of Pleasures can be found on Amazon here
His writing and reviewing blog can be found here 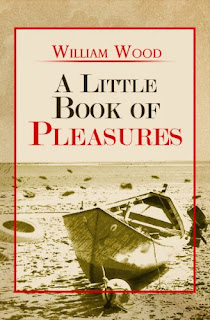 What an interesting life and career you've had, William. To be so well travelled is such a blessing. Thank you for sharing your life, inspirations and thoughts with us!

Thank you for sharing, William! A fascinating and truthful profile! I love your comments on auto biographies and your point that fiction always gets into a story at some point! Have a marvelous time writing and finishing your dream house.