Val Poore, who writes under her full name of Valerie, lives on a barge in Rotterdam, the Netherlands, so we've travelled down from Cumbria and nipped across the Channel to join her on her boat. Val's memoir, Watery Ways, and her novel, The Skipper's Child, are both published by Sunpenny Publishing.

Let's get started then:

SP: Val, could you tell us something of your background and how you came to be living in the Netherlands?

VP: That's a long story, so I won't bore you with all the details. Suffice to say I was actually born and raised in the UK, but then lived in South Africa for nearly twenty years before landing up in the Netherlands. I came here to Rotterdam to try and save a rocky marriage, which was already failing when my husband left Johannesburg to work in Amsterdam. I followed him a year later, but it didn't work. However, by that time, I'd developed a love for life on the water, so after a return spell to South Africa, I decided to come back and make my own life in this country.

SP: That's must have been quite a dramatic change both scenically and climatically. What most inspires you as a writer about living in the Netherlands?

VP: Well, I suppose it's because it's so different from the dry, warm climate I was used to in Johannesburg. After living at very high altitude in a place with virtually no natural lakes and even less navigable inland water, it was amazing to me to see this country that had been wrested from the sea. In the Netherlands, much of the land is below sea level, and canals and rivers are everywhere. I'd never experienced, or even known about houseboats, so seeing them in such profusion here was very inspiring and piqued my curiosity no end. I bought my own barge in a very special harbour in Rotterdam, and I love the life so much I find it endlessly inspiring.

SP:  Yes, of course! Your Sunpenny memoir, Watery Ways, is full of those stories about your harbour life, isn't it? What prompted you to start writing and how long have you been writing?

VP: Like most authors, I've been writing since childhood one way and another, but I only started thinking of writing seriously in South Africa. I have always loved radio plays, so I wrote three in fairly quick succession. I submitted them to both the SABC and the BBC, but they were all rejected, sadly. I also wrote short stories, one of which was broadcast on a radio station in Johannesburg. But when I came to the Netherlands, I read Peter Mayle's A Year in Provence and loved his descriptions of French rural people. He really inspired me to start writing memoirs because I feel so lucky to have lived in so many interesting places and had the chance to observe the life and people around me. On the one hand, I wanted to write them for myself to preserve my memories, but on the other, I really wanted to tell readers about the places and people I'd met, so they served both purposes.

SP:  Okay, but you have written fiction too and Sunpenny has published your novel for teenagers, The Skipper's Child. What do you prefer writing? Fiction or fact and why?

VP: That's hard to answer, really. I love both, but they require different approaches and skills. I probably feel more creative satisfaction when writing fiction, but I try and write my memoirs in a creative way as well - with structure and themes that readers can follow throughout the books. I enjoy the different demands of both fiction and non-fiction. 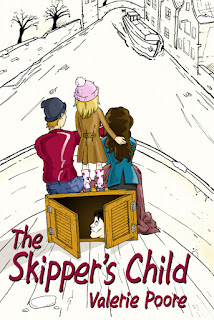 SP:  Val, do you write anything other than memoirs and novels?

VP: If you mean do I write for magazines or short stories? No, I don't, but I'm an enthusiastic blogger and love sharing my experiences and thoughts on my blog. I write a post every week, so it's good discipline and practice, and the reward is in the comments I get from my regular readers.

SP: We'll post your blog link at the end here so readers can have a look, Val. Now if you had to give the readers here a tip about how to get started on a book, what would it be?

VP: As some of the others have said, just start and keep going. Don't let anyone put you off. The only difference between those who write books and those who don't is determination and stamina. There are some brilliant writers out there who have never managed to finish a book, and in the end it's just self-discipline that gets you to 'The End'.

VP: Good question! Probably that determination to keep going and finish things I've started is my greatest strength, although my sister would tell you that's all part of my stubborn streak, which is possibly my weakest point too. Never giving up on something can also be detrimental, especially if you know that underneath it all you're wrong. I'm afraid I'm inclined to stick to my guns even when I know I shouldn't.

SP: Well, then on the basis of not giving up on something, here's another question for you. If you had to live for a year with only one book, what would it be?

VP: This would be a pretty hard question if I hadn't been asked the same thing just last week. After much thought, I decided I would go for Graham Greene's Monsignor Quixote, a book I absolutely adore and have read several times. It was a toss up between that and Offshore by Penelope Fitzgerald, which I love too because it's about a community living on the Thames. But Graham Greene won because I could imagine myself continuing the debates Monsignor Quixote has with his friend, the communist Mayor. This would keep me busy and stimulated in my year of one book!

SP: So leading on from that, do you have any favourite authors? If so, why do you admire their work?

VP: I do indeed. I'm a huge crime fiction fan and my absolute favourites are Deborah Crombie and Donna Leon. Both of them write with such a strong sense of place (London and Venice respectively) that I feel I'm there with them. The characters are also incredibly believable and well developed and there is always much more to the stories than simply solving a crime; they bring in social, political and even environmental issues too. They both write such evocative and thrilling stories that as soon as I know either of them has produced a new book, I have to buy it.

SP: Val, are you writing anything at the moment? Can you tell us what it is?

VP: Oh goodness, yes! I'm writing a novel set in South Africa, which has been on the back burner for a while, but I keep coming back to it to stir it up again. As I've just finished a travelogue about my partner's and my trip to France last summer on our barge, I'll definitely be going back to the novel again now. Who knows? I might even finish it this time.

SP: Right then, last question. If you had a bucket list, what would be in the top three positions?

VP: Hmm, if this is about things I would really, really like to do at some time in the future, then here's a short (but long) list of my top three dreams:

a) The first would be to have six months to cruise the English canal network; something I've never done and would just love to do.

b) The second would be to have the money and time to spend visiting all those lovely people I've 'met' on the internet. The first stop would be Tuscany in Italy to visit Tonia Parronchi, another Sunpenny author; then I'd like to go to Scotland to see Stephanie Parker McKean (also from Sunpenny). After that, I'd travel down through the UK and visit all the other fantastic people I've struck up cyber friendships with, especially in Wales (notably Julie McGowan, yet another Sunpenny author) before crossing the Channel into France where there are several special contacts. Lastly, I'd head for Australia and New Zealand, where I have a number of friends I've met online and have also met in real life but would love to see again. Phew! Sorry that was so long!

c) The third, well, this is a real pipe dream - I'd love to have the independent financial means to give up teaching before my official retirement age so I could concentrate on writing...but that one is the most unlikely of them all to happen!

Val, thank you so much for joining us on the Sunpenny Blog.  It's been very interesting to be here in Rotterdam too; it's such a modern, dynamic city.  However,  before we leave the barge and reach terra firma, here are the links to Val's books and blog.

What a lovely interview, Val! You are amazing. I love your "never giving up" attitude. Even if your sister calls it stubborn, I call it admirable! And please finish that novel so we can read it! I'm thrilled to be on the list of Sunpenny authors you want to meet. I feel like we're already old friends and I would love to meet you. We move to Dunoon, Scotland, on April 3. I'm not sure if there are any canals there...I'll have to check. There is a lot of water for Watery Ways traveling for sure! Thanks for this delightful interview.

Thank you for the lovely comment, Stephanie! I'll have to look up Dunoon now!!

That was really interesting, thank you for sharing.
You have made me think about memoir writing as well...

Maria, it can be a very creative medium too!