We hope you are enjoying these author interviews as much as we are. It's been so interesting to learn more about the background and location or our terrific team of international authors. After having travelled to Seattle (Sonja Anderson), Italy (Tonia Parronchi), Texas and Scotland (Stephanie Parker McKean), we are now in England in the beautiful Norfolk Broads area with Christine Moore, author of Going Astray, another riveting Sunpenny book.


Over to you, Christine!


SP: Chris, could you tell us something of your background and how you came to be living in Horning in Norfolk?

CM: When my husband took early retirement from his job, we lived in outer London. We looked round most of England for somewhere for us to have a shop (for vintage records, film and TV) with good living accommodation (so London itself was out with the money we had and the space we needed.) The place we chose was derelict but in a lovely spot on the Norfolk Broads looking over the River Bure. It seemed more or less by chance that we ended up there but, as many things do, it turned out well being a few miles from Sprowston where my mother was born and raised, so when she came to stay and later to live with us she had her oldest friend and her youngest brother still around. I also have memories of visiting Sprowston many times during my childhood. It’s friendly and beautiful here.

SP: That sounds lovely indeed. What do you find most inspiring as a writer about living in Norfolk?

CM: I don’t particularly take my inspiration from Norfolk (or wherever I am) so much as the many things and places I have experienced over my quite long life and how they’ve bedded in my mind and imagination.. They’ve been varied and I have enough material for a thousand books, though possibly/definitely not the application. However I do enjoy sitting with my laptop by the window in our upstairs living room looking at the boats and St Benet’s green and the river and the people walking and the children playing and the pub and the ice cream parlour and … my laptop too - occasionally.

SP: Ah, to have a view of water and boats is always inspiring, isn't it? What prompted you to start writing? How long have you been writing?

CM: I’ve always wanted to write. I was shy when young and longed to be able to express my ideas in written words – maybe partly because I got so much from reading. I hated what I wrote until I was in my thirties and got the hang of it a bit, partly by reading critically. I think I suddenly began to learn when I read The Judas Tree by AJ Cronin. It was something of a revelation and I still read with an eye to what makes something good or bad.  I let other things get in the way of writing though. The children have left home now but new things flood in to give me new distractions and duties. I’m just beginning to find more time by writing a few things at once and concentrating on the one I feel most like at the time.

SP: So what do you prefer writing? Fiction or fact and why?

CM: I prefer to write fiction. I learn so much from good fiction and become very engrossed. I love to weave stories and maybe have something inspiring or challenging within them. I like reading non-fiction too when the presentation isn’t too dry.

SP: So fiction it is then, but do you write anything other than fiction?

CM: I sometimes have to give religious/philosophical talks and usually I write down my ideas trying to sort them out in a clear and logical way. That would be a long essay I suppose. When I get to give the talk though, I don’t usually consult the words I’ve written. It just comes out.

SP: That sounds like some that happens to many presenters! Chris, if you had to give the readers here a tip about how to get started on a book, what would it be?

CM: CS Lewis’s stepson (whose name escapes me) said just sit down and start writing. I think you have to do that whether longhand, voice-recorded or keyboard. But if you still hate what you’ve done a few days later try reading good books in between and working out what makes them good. I like to have an outline in my head of where a story should go but for me personally so many new ideas pop up as I write that I can’t plan it out in detail, but other writers find detailed planning helpful. A good writers’ group can also be a help.

SP: Writers' groups can be an inspiration, can't they? What would you say is your greatest strength in life?

CM: My greatest strength and pleasure is being interested in other people – every one – what makes them tick? Why do they think as they do? What has happened in their lives? And so on. Just really nosy I suppose.

SP: And then (of course) what do you see as your weakest point?

CM: My weakest point is worrying whether I’ve upset someone or things aren’t right for them and thus becoming indecisive by not saying what I want even when I’ve been asked that simple question. I do let these things go, but I have to remind myself and make that effort every time.

SP: If you had to live for a year with only one book, what would it be? And do you have any favourite authors? If so, why do you admire their work?

CM: Well, it might be the Bible or Shakespeare but as I have that on my Desert Island (that’s a bit of an English reference to a long-standing English radio programme) I would choose in addition...hmm,  there are just too many. It’s impossible! Perhaps I’ll go for something really obscure: Viktor E Frankl ‘Man’s Search for Meaning’. This is written by a concentration camp survivor and it is full of wisdom and positivity.

SP: Now that's a different choice. Are you writing anything at the moment by any chance? Can you tell us what it is?

CM: As I mentioned above, I’m writing several things:

I’ve a completed medical thriller that I’ve just started sending out to agents – 2 rejections but with positive and personal comments.

I’ve completed another novel called ‘Little Devils’. It’s a thriller about a young teacher who gets involved - partly through the needy pupils she visits in various schools – with criminality and pornography. She has her own personal battles too. The novel pursues the idea that there is evil in the world but for most people it comes in the form of ‘little devils’ rather than big horns. They can disrupt our lives and keep us from being the best we can. Nightmares come into it. I haven’t sent it anywhere as it needs to be revised. It’s not quite right.

I have written the beginning of a children’s book (thriller/adventure again) for 8-13 years roughly, about a boy, Tom whose best friend next door disappears with his family while Tom is away. The house next door is huge and squatters move in.  Tom becomes involved with the squatters and the search for his friend. He is helped/advised by his twin sister, Emma, who died but he still hears and sort-of sees her. It’s too long to explain the plot but I love the way it starts so have already sent the beginning to one agent and one publisher and haven’t heard back from either.

Finally I’ve begun a follow up to my novel called Going Astray (which is already published by Sunpenny) about a family that becomes involved with a religious cult. The family is out now and we hear at least three points of view of life after the cult - a thriller again. I quite like the way it’s going so far.

SP: Christine, that sounds as if you are very involved with your writing. That's wonderful! Well, this is not the last question for you. If you had a bucket list, what would be in the top three positions?

CM: I’m not keen on bucket lists as it suggests life isn’t complete without having certain experiences and … well let’s forget the sermon.

Three things I’d quite like to do are (1) be able to fly, but failing that, have a sky dive from a great height. Not sure it would be safe though. (2) see inside the brain of Donald Trump, but failing that, having a long, honest conversation with him – or any other world leader, maybe even a properly inspiring one and (3) have a holiday at a spa where I could do all sorts of interesting, fun and relaxing things (for about a month) and especially have a massage every day.

Thank you so very much for joining us here today, Christine. It's been a fascinating and insightful interview and just great to learn more about you.

We've posted the link to Christine's book at the top of the page, but here it is again. It is available on all Amazon sites as an e-book and paperback: 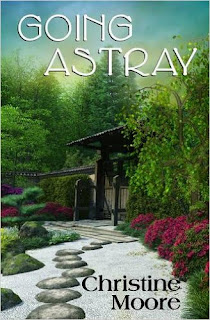 I enjoyed this very much, Christine. Even if you don't draw your inspiration directly from your environment, I can see it would be a lovely place to write. Like Tonia, I can picture you there!

Janet Purcell said: I enjoyed getting to know Christine in this interview---and I especially enjoyed seeing that picture of her and her husband on their bowling green. They look so content to be together! I haven't read her latest book but am heading right over to amazon when I click off here.

Excellent profile! Interesting to the max! Way to go with all that writing, Christina. And being honest about it to decide if it is ready to stand...or needs to take a few more baby steps first!