The English Writing Festival in the Netherlands

Some of our writers live in countries where English is not the first language. Last week, Tonia Parronchi told us about a talk she gave to a Language School near her home in Italy, and this week, Val Poore tells us about an English Writing Festival she arranged in Den Haag (The Hague) with a special focus on memoir writing.


"This is the third EWF we have held now," says Val. "I started organising them in cooperation with the American Book Center in The Hague because I found it frustrating that there was so little going on for English language writers in Holland. What there was tended to be in Amsterdam, so by organising these events, I was able to extend the possibilities a bit more.

This last event on memoir writing was the third EWF we have held. The first two were on a wider range of writing genres, and in fact the one we held in November focused on those entering the NaNoWriMo writing challenge. They have all been successful in terms of interest and numbers. We cannot cater for more than around 25 people in the audience, and we had the maximum on this last occasion although not everyone arrived at the beginning.

There were four speakers, three of whom were published memoir and non-fiction writers, and they gave some great tips and advice for those wishing to embark on writing their memoirs. I didn't speak this time, but acted as hostess, time keeper and question leader, which meant I could contribute too. 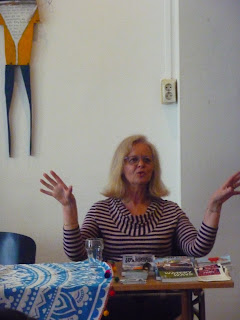 One of the speakers, Jo Parfitt, is also an editor, publisher and writing coach, so she was able to give advice to the participants on how to go about the publishing process and what editors look for in a manuscript. 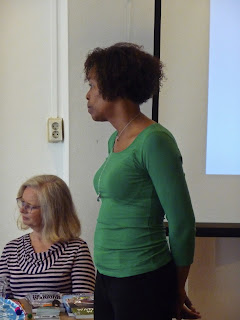 Niamh Ni Bhroin and Carolyn Vines have both written and published their own memoirs, which gave them the opportunity to talk about why they wrote them and what approach they took. It was very interesting to hear how instrumental many memoirs are in recovering from unhappy or abusive situations. 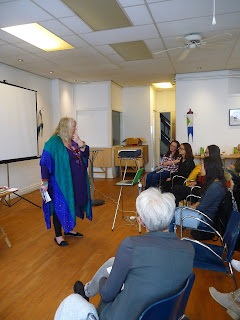 After the last speaker, we had a question and answer session for the audience. There were several very pertinent and insightful questions about both content and authenticity, as well how to deal with writer's block. All in all, it was a useful session for both audience and speakers and there were plenty of laughs, as well as poignant moments too. Even better, we were able to sell a few books, so that was immensely rewarding.

I'm now looking forward to organising the next one to take place in the autumn."

It sounds as if this was a lovely event and a great way of bringing writers together to talk about their work and gain some much needed exposure in a foreign language market. If writers in other countries find it difficult to persuade bookshops to give them space for signings, events like these are another great way to attract customers.