How to Create a Book: Bridge to Nowhere and Bridge Beyond Betrayal by Stephanie Parker McKean

This guest post from Stephanie Parker Mckean is the first in a short series of posts we are going to be publishing on the 'back story to the books'. We thought it would be great for our readers to know where the ideas for our authors' books came from. This week we are kicking off with a post from Stephanie Parker McKean. She tells us the very special back story behind her series of books featuring the zany Miz Mike.

As Stephanie says:
Folks sometimes ask me where I get the ideas for my books. Not being facetious, but the answer is simple. Anywhere and everywhere.

The idea for my first Sunpenny-published mystery-romance-suspense “Bridge to Nowhere” came at me literally – out of nowhere! One day while taking a new route through the Texas Hill Country I came to a humongous new concrete bridge. It was impressive! What was even more impressive was the fact that the bridge – didn’t go anywhere. I was so mystified when I got to the other side of the bridge and found that it went nowhere that I turned around and went back across it again from the opposite direction to see what I had missed. Surely an expensive new bridge on a paved road must go somewhere – but this one didn’t.
Over the next few weeks, I couldn’t get that bridge to nowhere out of my mind. I was working for a newspaper in Bandera County, Texas, at the time and not even my fellow reporters could explain the bridge to nowhere. It wasn’t in our county, so digging up facts proved time consuming. Only a partial story emerged out of my investigation: a housing development was scheduled for that area to provide homes for San Antonio commuters. The developer had matched funds with the state highway department to have the bridge built. Some county residents were outraged, however, that tax dollars had been used to build a bridge that benefited no one. The “bridge to nowhere” became a joke with a razor-sharp punch line. And that's where the title for my first Miz Mike book came from.

While at work sorting through boring minutes from county commissioners’ meetings, my mind spun off into intrigue and adventure. I never planned to write a series originally. My idea was to write a book that I would enjoy reading. I wanted an older protagonist more in line with “Baby Boomers,” and a clean-reading mystery-romance-suspense that would entertain without embarrassing. Texas Miz Mike was born.

The problem with creating a zany, slightly bonkers, slightly klutzy character like Miz Mike is…that she’s fun! She’s fun to write about, fun to read – and too good to get shoved into computer files and forgotten. She somehow bounced off the pages and became so real that I know what she’s going to do and say without stopping to write down an elaborate outline first. Outlines wouldn’t work with Miz Mike – she wouldn’t stay inside the lines! She also couldn't be confined to just one book.

Miz Mike started out as “Nicole,” because my invented author could write her invented mystery series under “Nick Rice” so men would be more inclined to read them. Then a spiteful Nicole blundered into my life and I couldn’t bear to use that name. Nicole changed to the Biblical name of King David’s wife, Michal, or “Miz Mike.” She can write her imaginary books under Mike Rice to attract a male reading audience.

Since a series wasn't part of the plan when I wrote “Bridge to Nowhere,” Sunpenny and I spent painful months agreeing on a title for the sequel, "Bridge Beyond Betrayal". My original title was, “Dead Body in a Pickup Truck,” but editor Jo Holloway pointed out that was perhaps not the best title for a romance. Without giving the story away, the story revolves around a body that Miz Mike finds, a body that keeps disappearing again until no one believes her. 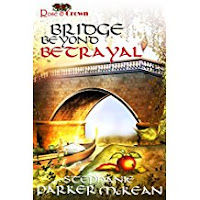 From the first, Mike was supposed to fall in love with and marry her cowboy hero Marty, which is where the secret M&M candy game came into the books (the secret is in the books!), but Miz Mike refuses to stay between the lines and when a handsome new feller comes along…well, again... it’s in the book. Who betrayed her, why she was betrayed, and how she recovers from that betrayal explains the title and bridges the two books.

Both Bridge to Nowhere and Bridge Beyond Betrayal are packed with comedy. The intent is to help the reader laugh and celebrate life.

Sadly, Bridge Beyond Betrayal doesn’t make me laugh as much as it once did. My son USMC Major Luke Parker was killed in a plane crash just before the book was published. Bridge Beyond Betrayal is dedicated to Luke, and the prophetic poem he wrote one year before his death is included. For me, it helps take the pain away. For other readers…I hope Miz Mike will go crazy enough outside the lines to make them laugh!

Stephanie, thank you for sharing your story. It's a special background to a special series!For anyone interested in reading these first two books in Stephanie's Bridge series, follow the links below:

Thanks, Val! I am honored to have had this spot in the Sunpenny Blog. Thanks, again, for pulling it together and for all you do for all Sunpenny writers.

Thanks Stephanie. I love Miz Mike so it was great to find out how she came to life. You have had heartbreak in your life too. Maybe that helps you create characters who are real and funny in spite of certain sadness in their lives. A sense of humour helps ... always.

I loved this post, Steph! I think Tonia's right, but having just finished Bridge to Texas, I know your spirit is full of fun and life's bright sides!

A lovely insight into the creative processes behind the quirky Miz Mike series, Stephanie. What a great concept, turning a curious concrete eyesore (the magnificent 'bridge to nowhere') into an adventure for all to enjoy. How painful to lose your dear son in the process of releasing 'Bridge Beyond Betrayal', yet bravely persist in releasing another Miz Mike adventure for we readers, though your heart must have been breaking. So pleased you allowed Mike to run outside those lines.