The story behind Sophie's Quest by Sonja Anderson

The truth is incontrovertible. Malice may attack it, ignorance may deride it,
but in the end, there it is.
Winston Churchill

I'll never forget listening to author Frank Peretti addressing the idea of truth. "If it's true," he said (and I'm paraphrasing here), "It's true whether you believe in it or not. Whether you even know about it, or not. It's just TRUE."

The truth is a hot topic these days. The idea of "fake news" is thrown around casually, as if it's a widely understood "fact" that many journalists have abandoned all their training and integrity and are just writing any old thing that gets people to pay attention and believe what they want them to believe. And maybe that's the case for some.

I like to believe that, deep down, we all still value--and want to know--the truth about things. No one has a corner on the "truth, the whole truth, and nothing but the truth," but there's a sense that the truth is out there for us to find, somehow, someday.

Years ago, 2nd graders in my multifaith class at an international school in Tokyo wanted to know what was true, too. These were kids of every faith background except for Christian (those kids were divided between Protestant and Catholic groups), and so I started with the basics--I read stories from all the major world religions and tried to focus on something universally good about each story. I tried hard to be a good teacher and read all the stories with equal enthusiasm and equally earnest facial expressions.
So it astonished me, after reading some Bible stories, that the hands shot up. The Muslim and Buddhist hands. The non-religious hands too. "Is that a true story, Miss Young? That's a true one, isn't it?"

It was that experience that triggered my own journey toward writing Sophie's Quest. After a brief glimpse of an owl character in my mind (owls are supposed to be wise, after all), I set aside the idea of writing a story that would investigate who God is until my own daughter brought it all back up with an argument on her elementary school playground. At age 5, she was trying to educate some of her friends about the truth, as she understood it, about God's power and "bigness." 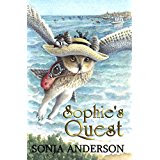 My owl flashed back into my mind, and the rest is history. While I probably raise more questions than answers in the story, I sincerely hope that the truth that God exists, that He made you and loves you, and that He wants you to trust Him with your life, shines through the words on the pages of the Sophie Topfeather series.

Thank you so much, Sonja, for this special insight into what inspired your books. For those interested in viewing and reading Sonja's lovely books, here are the links on Amazon.

Lovely background story, Sonja! And what an amazing life you've had and an amazing number of children your teaching has impacted. Good for you! God bless and keep you always.

Wonderful back story, Sonja! Thank you so much for sharing it here!