The story behind my character invention by Tonia Parronchi

This series of back story blogs is so interesting that we've decided to do another couple of posts. This week, Tonia Parronchi tells us what inspires her characters when she writes fiction.

People always wonder about how a writer invents characters. I find that each book and each character is different. Of course, in the case of a non-fiction book one writes about real people so no imagination is needed. A novel on the other hand is all about a writer's imagination. A while ago I wrote two blogs about different aspects of character creation which show how the process works for me. The first, from Feb 2013 published on my website (www.toniaparronchi.com), talks about my literary novel set in the beautiful Tuscan valley where I live. 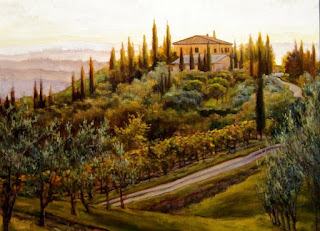 In this blog I explain that after reading my book, The Song of the Cypress, a friend of my mother's said that she assumed that I had drawn on my experiences as an English girl living in Tuscany when writing. That is both true and untrue at the same time. Living here gives me a realistic viewpoint and the ability to describe the area in accurate detail. However, none of my characters are based on myself. The third comment I had was from a lady I met who had read my book. She amazed me by launching into a detailed discussion of the plot and characters as if they were real people - a bigger compliment I cannot imagine! She asked me if my heroine was based on me and my reply was, absolutely not. There are only two characters who have some basis of reality, Rita, who is a neighbour of mine and a wonderful source of stories from the war years and Luna, the dog. Luna looks different from my Stella but every delicious doggy moment in the book is based on her. Now that she is no longer with us, every time I reread bits of the book I want to laugh and cry at the same time - I miss her so much!

However, the characters in my book grow with me as I write. So much so that sometimes I have to go back to the beginning and rewrite scenes to add details about them that I did not know when I began. At the moment my head is full of new characters. I am not at the sleepless-night phase but the washing-up gets frequently interrupted as I dash to dry my hands and write down some new idea that presents itself to me from within the soapsuds. I love this process, this complicated double life I live, where my new "friends" seem almost as real as my family at times.

The second blog from my website is about my new novel "The Melting of Miss Angelina Snow", a funny story set in the UK but with a very Italian hero who is unashamedly based on my friend Tonino. Anyone who has read my sailing Memoir "A Whisper on the Mediterranean" will remember Tony as the owner of the beautiful sailing boat Elisir with memorable  mirrors in the bathroom.

" Elisir, a splendid boat with shining woodwork and gleaming bronze fittings, which looks as if it should be used as a movie set.  Tony is the most erudite person I have ever known. The tatty, well-thumbed copy of Dante's "Divine Comedy" left casually by the sink in the head is an unusual aid to concentration but Tony has put it to good use and is capable of quoting huge chunks of it after a few glasses of wine."

We had many splendid sailing adventures together but life took a nasty turn when he died a few years ago. I couldn't accept his death, couldn't bear to think that his adventures were over and, without planning to do so, I found myself writing him into something new that I was working on. In this case my fictional character (because inevitably the real man gradually became absorbed by the fictional character) looked like Tony, dressed like him and spoke like him too.

This is a photo of my dear friend Tonino. He died in tragic circumstances a couple of years ago and I have never come to terms with his death, so much so that I found myself using him as the main character in the book I am writing at the moment.

In "The Melting of Miss Angelina Snow" I have tried to keep his personality just as it was; grumpy, sarcastic, caustic, super-intelligent but also kind and very, very funny. I am giving him the life that he should have had, letting him recover his health, retire and move to a new country and eventually fall in love with his extremely daunting estate agent.


Sometimes (when I'm writing) I can hear his voice in my head and remember the look he would give me whenever I said something daft. He keeps me from getting too wordy or too romantic and makes sure that I stop work at the right moment to open a bottle of wine, or why not two!

I miss my friend a lot more than he would have imagined. I am not sure if he knew how much I cared about him but I hope so. It was hard to write the opening chapter, taking the accident where Tony drowned and turning it into a near death experience that is almost funny instead of tragic. After that however the book began to unfold really quickly, other characters made their presences felt and became my constant companions as I moved around the house or tried to get to sleep at night.

I am so lucky - writing is fun and wonderful. I disappear inside my own head completely at times but fortunately my husband, Guido, is always there to remind me that it is dinner time. If I am lucky that news will be accompanied by the smell of a yummy garlicky pasta sauce and the sound of a cork popping.

I carry a notebook with me and jot down lines or impressions that come to me. Often I throw these away at a later date when re-reading them doesn't trigger any emotion. Other times these notes can become big writing projects. I also fix things in my mind by describing them to myself if I don't have a pen and paper handy. This is my way of remembering. I pretend I am writing a scene and create sentences in my head to fix the memory.

One of the things that I love most about being a writer is the way even a chance meeting or fleeting glimpse of something or someone can be elaborated on until it comes to life in words on a page. In "The Melting of Miss Angelina Snow" I write about a girl called Grace. When I needed to create a character, who would be the counterbalance for a rash, adventurous young man, I suddenly remembered a beautiful black woman who walked past me on the beach one summer. She was slim and naturally pretty, with none of the make-up and jewellery that Italian women love to wear to wander up and down the seafront. She walked alone with her head up, gaze far away as she observed the sea and I though how very lovely and graceful she was. And that is all that I needed. I had found "Grace" in a fragment of memory.

Thank you, Tonia. What a lovely tribute to your friend! For anyone interested in Tonia's books, you can visit her author page on Amazon, which is where you will also find her Sunpenny publication, A Whisper on the Mediterranean 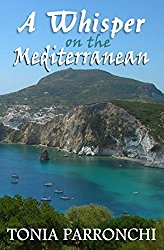 A lovely post from Tonia. I was moved by this!