The story behind Rooster Street by Janet Purcell

As most readers know, North American history is inextricably bound up with the iniquities of slavery and the slave trade and even after it was abolished, the struggle of the former slaves to make new lives in freedom was often heart-rending.

In Janet Purcell's page-turning novel, Rooster Street, two stories unfold: the first is set in the 21st century and tells of a young woman's research into the history of a house in Cape Cod, the second is that of a runaway slave girl who begins a school in Rooster Street in Boston. How the two stories become entwined is revealed in this compelling book.


We asked Janet how she became inspired to write Rooster Street. This is what she said:

"I’ve been asked a number of times what led me to write about a runaway slave.  I’m not a person of color, I do not have ancestors who were slaves or slave holders.  No one in my family were even abolitionists.  So why?

I’ve pondered that question long and hard and the only answer I’ve been able to come up with is—I care.

I grew up in a city, Trenton, New Jersey, and went to school with kids of all races and ethnicities.  It didn’t matter to us what color our skin was.  We were just friends.  But segregation began to rear its ugly head in the south.   I watched as black children were not allowed to enter their school--kids who looked just like some of my friends. I started seeing race riots across the country on tv, reading about atrocities being done to good people who just wanted to live a quiet life, to become educated, to raise their children in communities that accepted them as equal.

As an adolescent who loved to read, I was always drawn to books about brave women who overcame great odds.  The American pioneer women who followed their men across America and made homes and raised their families against all sorts of deprivations.

And, of course, I devoured books about the bravery of the African people who were torn from their families, brought to America and sold into bondage.  My heart ached for them being treated worse than animals and my heart swelled with joy for the ones who so bravely escaped.  I read with fascination about the Underground Railroad and had strong admiration for those who helped the runaways move to a safer place where they could be free and begin building real independence for themselves.

And there’s something about my love for and admiration of my mother in my writing.  She was born to a poor family and abused as a child growing up in New York City.  She loved to read and made friends with two women who worked in the local library.  When the abuse continued and she got to an age where she could do so, she climbed out her bedroom window one night and ran away.  The library women took her in and finally helped her be placed in a foster home where she served as a nanny while going to school and preparing herself for her adult life.   She married, raised my sister and me and became an adroit business woman and opened a very successful children’s clothing store.

I know you may be thinking by this time “How do those two separate inspirations to write Rooster Street mesh?  What’s the connection?”  I’m sitting here, fingers on my keyboard asking myself the same question.  When I began writing this blog story I decided to do it “stream of consciousness” and that has been a real eye opener for me.

What I’m seeing is  Rooster Street was born in my caring about the strong spirit, the instinctual drive to better oneself, the intelligence of those held in bondage and abused.  I want to set them free and so greatly admire not only their bravery in breaking those bonds and fleeing, but then facing all the barriers they encountered and persevering to achieve their place in society which they deserved. As I was writing the book, I never stopped to ask myself why.  Althea came out of nowhere and was a gift to me.  She told her story to me as she became real on the page and she fascinated me the entire time.

I like to meet with book clubs who have read Rooster Street and so many people have commented about the mother-daughter relationships throughout.  I was not aware of that as I wrote the story.

The primary one is Lou and Althea, but also there is, in the beginning, Althea’s mother and Althea.  Farther on, there’s Bessie, the older slave woman who became a sort of surrogate mother to Althea when her mother died.  Next comes the new plantation mistress and Althea, then Liza Bell and Althea during her stay at the general store, then Mrs. Barbiero and Althea at the boarding house.  And in the present-day story, there is the troubled relationship between Jennifer and her mother, the important segment near the end with Dolores Austin and Jennifer, and the reconciliation of Jennifer and her mother.

I’m a journalist and I came to that profession because I was more comfortable writing about other people rather than revealing myself.  But I’ve come to realize that as fiction writers, we can not hide.  What we care about most deeply finds its way up to the surface."

Thank you for this fascinating insight into your book, Janet.

For anyone interested in reading this compelling novel, the link is here: 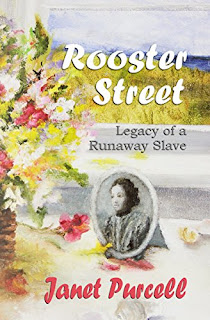 What a fascinating back story! I loved this!

Jan, how brave of you to ask yourself the publishers' question. Then to carry us all with you, as you take the journey of answering. As a poet, I really understand that people are finding (important) facets in the jewel you have created, facets you did not know you had inserted, let alone polished. With all my heart, I celebrate your Muses -- the art (o that Peace Rose at Capital Health!) and the books -- and your lyrical reviews of the art of others. We are so blessed to have you in our midst. Congratulations! Carolyn