The story behind The Skipper's Child by Valerie Poore

This week's post is another back story by one of our authors, Val Poore. Here she tells us what inspired her to write her novel, The Skipper's Child, published under the Sunberry Books imprint of Sunpenny Publishing.

"Most people who read my blog and know about my watery life generally associate me with memoirs. However, I have also written two novels, one of which, The Skipper's Child, is published by Sunpenny and is also about my watery world. However, this one concerns the history of barge life itself rather than the barges.

The Skipper's Child is a sort of cat and mouse adventure set on Europe's waterways in December 1962 at the height of the Cold War. 1962/63 was also the longest and coldest winter on record in Europe in the 20th century, even exceeding 1947, I believe. The story is woven around the Kornet family: Hendrik, a commercial barge skipper, his wife Marijke and their three children, Anneke, Arie and Jannie. Essentially, this family is based on my partner Koos's parents and two sisters.

When I first met my partner, he told me he was brought up on a barge. He then regaled me with numerous stories of what life was like for a skipper's kind (child). It was neither glamorous nor exciting and despite travelling all over the Netherlands, Germany and Belgium, he felt very restricted as they were always on the move and he could rarely leave the barge. For the most part, he told me, it was incredibly boring. All the same, I was fascinated by the stories of family life on board and the tough conditions they considered quite normal for their way of life.

I knew then I wanted to write about this old and very special way of life. Skippers these days have quite a luxurious lifestyle with all possible mod-cons; even their cars travel with them. In my partner's time, they had no electricity, no central heating and no interior insulation either, so it was not unusual in the winter for them to wake to ice on the inside of the cabin; on occasions, they even got frozen in and had to walk across the ice to get to land.

Thinking about all of this sowed the seeds of a fictional story in which I could incorporate both his memories and also a few of the anecdotes his father told him about earlier times, especially during and after the war. And so Arie, The Skipper's Child, was born. The outcome is an adventure involving Russian spies, secret service agents and a young stowaway who has failed in a mission that he was not aware he was undertaking until he overhears a conversation where he learns what his fate was meant to be.

The main target audience for the story was my younger self. It was the sort of book I'd have been reading in my early teens, so I set that as the 'age' for the reader. But in truth, most of its readers have been adults.  The only real YA (young adult) feedback I've had has been from The Wishing Shelf Awards whose panel of judges for all the YA entries were teenage school children. Luckily for me, they liked it and The Skipper's Child won a Silver Award.

So if you feel like something completely different from the usual action packed adventure, you might like Arie's story. The link to the book and all the reviews is here. The link to a book blogger's review can be found here too." 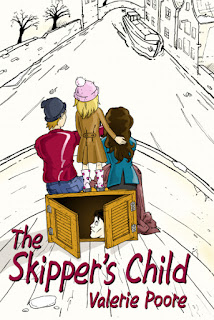 A great post, Val! Thank you for sharing those beautiful pictures, too. I love hearing how stories are born, and this one is so unique!

Fascinating, Val! Thanks so much for sharing this. I LOVE "The Skipper's Child." It's one of the few books that I think of often after having read. You are right - it is a book for any and every age reader. It targets the child in all of us. May we always keep that younger us alive and discovering mystery and magic in the world, both of which The Skipper's Child" delver.

Thank you both so much. The Skipper's Child is the book I've loved the most of everything I've written. It is very special to me!